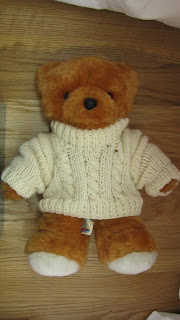 The Aran sweater in Ireland is called an geansaí árann. It is a style of jumper or sweater as they are called in tourist shops, that takes its name from the Aran Islands off the west coast of Ireland It is also known locally as a fisherman sweater. This I think describes the true history of the Aran. In years past it was the wives of island fishermen who knitted these sweaters. They used unwashed, untreated,undyed wool from sheep which retained its natural lanolin oils, this insured that the geansaí would be totally waterproof against the harsh elements of working at sea. It also guaranteed warmth. These fisherman sweaters were never washed in soap and water as this would have washed away the natural oils.The aran geansaí would be cream coloured báinín to start with but with wear and lack of a warm wash the colour would have been a murky grey. Up to the 1970s, the island women spun their own wool on spinning wheels.It has been said that each aran sweater that was knitted on the islands by the different families had its own original, unique pattern. The reason for this is sad in so that if a fisherman was lost at sea and was found, maybe weeks later, on the beach, his body could be identified. by the stitch pattern on his geansaí.The honeycomb stitch is a symbol of the hard-working bee.The cable (a huge part of a fisherman’s life) is a symbol of safety and luck when fishing.The diamond stitch is a symbol of success and wealth.The basket stitch symbolizes a fisherman’s basket and the hope of a plentiful catch.In the past, the majority of aran sweaters and were knitted by hand, today the majority of items for sale in Ireland and elsewhere are machine knit.. There are very few people still knitting sweaters by hand on a commercial basis.Machine-knitted sweaters tend to use wool blends instead of 100% wools and have less complex patterns, since many of the traditional stitches cannot be reproduced this way. They are also the least expensive option. Hand-knit sweaters tend to be more tightly knit, to have more complex stitch patterns and to be longer-lasting and they attract a significant price premium. By holding them up to light, the difference between the machine knit and hand knit is evident.
Posted by The Wool Shop at 11:39 AM